Owen had a conference in St. Louis so we went to Missouri early to see my mom. These pictures are from the return trip to Saint Louis from Columbia along I-70. Many of these were taken out of the car window which as you know isn't my preferred method:( But we spent a great deal of time at the historic ones we found in St. Louis which are described below in more detail. A big shout out to Owen for doing the water tower research before we left!


There are three historic water towers in St. Louis. The Compton Water Tower is in a beautiful park. It was designed in 1897 and was a highlight for visitors to the St. Louis 1904 World's Fair. It was taken out of use as a standpipe in 1929 but was used as a support for the Water Division's dispatch antennae until 1984. It was put on the National Register of Historic Places in 1972 and a large restoration project was completed on it in 1999. It is open for tours on Saturdays during the summer but we missed out. Next time!

The other two towers (aka standpipes) are called the Grand Avenue (white) water tower and the Bissell Street (red) water tower. They are very close to each other in small roundabouts. I was actually able to get a picture with them both in it but it wasn't my best so I left it out. The white tower is the oldest of the 3. It was built in 1871 and is a Corinthian column. The red tower was built in 1885 and is in the Hyde Park City Historic District.

I am writing this post more than 3 years after this trip but if you'll remember in August of 2014 there were riots in Ferguson, MO that began after a fatal shooting of African American Michael Brown by a white police officer. Ferguson isn't far from these watertowers and I remember seeing a sign propped up against the fence of the white watertower that said, "We must stop killing each other". It was a somber moment and it saddens me that so many years later I am still concerned, overwhelmed and unsure of how to fix this country's violence and lack of civility.


After the trip, my mom went back and painted me a beautiful watercolor of all 3 towers. 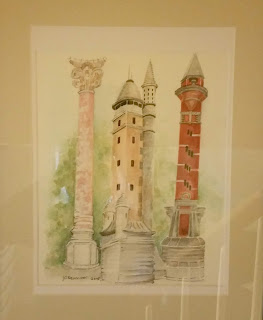 Posted by Kelley Dennings at 8:00 AM No comments:

Email ThisBlogThis!Share to TwitterShare to FacebookShare to Pinterest
Labels: MO

I was fortunate, when I worked at the American Forest Foundation (AFF), to travel to New England frequently for my projects. Digging back through my calendar, now 3-years later, I went to Massachusetts and Connecticut in the cold, snowy, winter for a couple of meetings. One meeting was an Estate Planning workshop hosted by our partner there, the New England Forestry Foundation. The other meeting was a Tools for Engaging Landowners Effectively (TELE) meeting at Harvard Forest.

The best thing about these visits is that I got to hang out with my friend Alexandra, my uncle, and my cousins, all who live in the Hartford area. Alex graciously housed me multiple times over the years and this trip, in particular, was wonderful because I was still recovering from surgery.

I am trying to remember why I went to Southington, CT which is south of Hartford. I may have met an old Keep America Beautiful colleague who lived down that way. I am starting to remember lunch at a pizza place ...

By the looks of these plows, I just missed a pretty big snow thankfully. This no-descript water tower was in the parking lot of the mall where I met my family for dinner.


On my way to Sturbridge, MA, which is where I would often stay, I passed this beautiful old mill on  I-84. I stopped and got this great wintery picture. I just read up on the history of this place - Talcottville historic district within Vernon, CT. It was such a cute little historic area. I highly recommend a drive-by.

I saw the most picture-perfect scene on my way to the Harvard Forest just outside the University of MA-Amherst in the small town of Pelham. The white church, white water tower, and white snow were beautiful!

Posted by Kelley Dennings at 9:00 AM No comments: